Recently we have worked on objects that have gone into the newly opened Ancient Egypt galleries at World Museum, Liverpool.

These included three objects for the recreation of a pre-dynastic burial pit (skeleton, ivory bracelet and composite ivory/metal knife), a decorative ivory fragment, ivory pot, slippers and a wooden staff. It is such a privilege to work on such great materials, also knowing that visitors will get to see and admire the objects as well.

Here are just some of the highlights of the conservation work…

Skeleton. The skeleton was very fragile, primarily from the original burial environment. However, having been in storage for many years the skeleton required stabilisation so that it was robust enough to be on display and to reconstruct elements to make it understandable for the exhibition visitor. A minimalist approach is always applied with human remains, with a limited use of chemicals and adhesives.

The main work on the skeleton was to reconstruct the facial area of the skull where the nasal cavity, palate and eye sockets had broken away. Small tabs of glass tissue were applied across break edges where the natural break was not sufficiently strong to ensure structural support. The broken long bones were rejoined and any spongy bone exposed was consolidated so it did not crumble from touch. Where burial soils were still attached to the bones, a simple soft brush approach was taken to remove any excess and reveal the surface.

Knife The composite knife with ivory handle and metal blade was suffering from cracking and the application of a thick wax that had been applied across the surface in the past. Some corrosion of the metal had occurred which had caused soils to adhere to the blade. 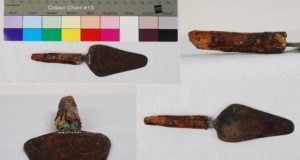 The wax was applied to the object after its excavation in the early 20th century, it had served a purpose (it is unlikely the handle would still be in one piece without it), but now it had decayed to a point which was detrimental to the strength of the handle. With the wax removed (as much as possible) a new conservation grade consolidant was applied to the handle, ensuring that it stays together for many years to come.  The blade was also cleaned to remove its old wax coating and soils that had become stuck to the surface, and then re-coated with a conservation material.

Bracelet The ivory used to make this bracelet had begun to laminate and weaken the overall structure of the object. In the past it had been covered in wax as a support, this was beginning to break down and discolour, further weakening the bracelet. The wax was removed as far as possible without causing more damage, and a consolidant applied to strengthen and stop any further cracking. Sometimes after conservation an object looks exactly the same as when you started, but you have the satisfaction of knowing it is in a better condition!

Bracelet before (left) and after conservation (right)

The three conserved objects (skeleton, knife and bracelet) are now united with other wonderful objects in the exhibition Ancient Egypt: a Journey through Time. A blog by the Liverpool Museums team highlights the The pitfalls of recreating a pit burial.

The burial pit with conserved objects in place.

Decorative ivory fragment The ivory fragment was suffering from a small adhesive issue: in the past a label (or similar) was stuck onto the surface, over time the adhesive had become yellow and hard and stained the surface of the object. This is why we do not use tapes or sticky labels in museum collections now.

I used solvent to gently lift the remaining residue from the surface and over many days I used a poultice to lift the stain out of the object. 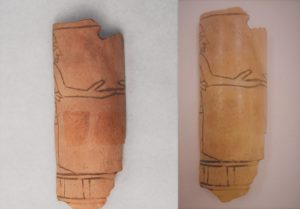 Ivory pot The little ivory pot had suffered from a smash and was in eight pieces (as well as multiple tiny fragments).  After re-joining there were a few fragments missing, the decision was made to only support (with a small gap-fill) areas that needed structural assistance, but not to hide the damage, so the story of the object can still be seen.

Slippers The slippers are made of palm fibres that are interwoven together, over time these had become brittle and the slightest touch could cause fibre loss. There was also a thin layer of soil from the burial environment coating the surface. To remove the soils the slippers were cleaned slowly with distilled water using a cotton swab, this improved the visual appearance of the slippers for display. The slippers were consolidated where palm fibres were loose and splitting to ensure that no more original material was lost.

Staff This little staff was in three sections, the damage and cracking on the object happened long ago, and the object had patches of darkened glue where it had been repaired after excavation. To enable rejoining, the old glue was removed as far as possible with solvents, this allowed conservation grade adhesives to be applied to rejoin the object. 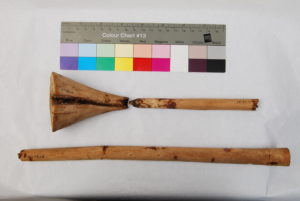