We like an interesting work trip at Drakon, so at the start of the month we headed to Hadrian’s Wall to sample some of the Roman events taking place to celebrate its 30 years of World Heritage Status. The theme of the celebrations is Hadrian’s Cavalry, with an ambitious programme of events and activities across the multiple venues and museums along the wall. 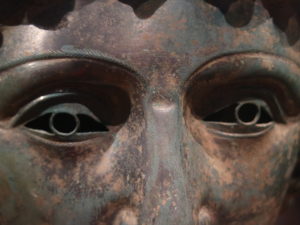 Our first stop was Tullie House in Carlisle. A temporary exhibition of truly remarkable material, some from the museum’s own collections with lots of exciting loans, the displays explore the structure of Roman cavalry units across the empire, and the fact that a significant proportion of them were based on the north west frontier.

Many wonderful objects brought the daily life and equipment of the Roman cavalry soldier and his horse into sharp focus, from a magnificent leather and metal horse cavalry mask, to many small items of personal and military kit. I particularly enjoy a museum diorama, and one of a full cavalry unit didn’t disappoint. All this leading to the absolute drama of a selection of full face cavalry masks from across Europe, including the Crosby Garrett helmet. Magnificent. 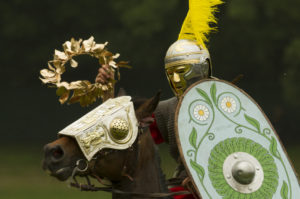 After that, we headed to Bitts Park for the Turma… We were first inspired to undertake the trip by a talk by one of the curators organising the event. It’s an ambitious undertaking, assembling 30 or so horses and riders to stage a Roman cavalry event, possibly for the first time in millenia…

As we waited for the event to begin, we managed to catch a few of the Ermine Street Guard to talk helmet construction and materials, all very useful for a project we’re beginning shortly. Then we filed into the arena to watch a combination of infantry and large scale cavalry manouevres, followed by individual horseback combat by the elite cavalry- there was something quite extraordinary about watching the elite riders in the full face masks- such a theatrical and slightly sinister concept. We felt the event would have benefitted from a bit more of a festival backdrop (i.e. sausage and booze), but otherwise, a fascinating experience. 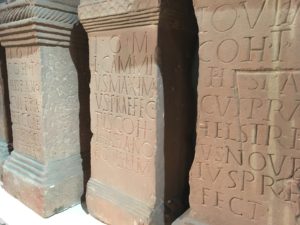 The next day, we headed south to the extremely interesting Senhouse Roman Museum behind the wall at Maryport. This tiny museum sited on the earthworks of a Hadrianic fort contains a fantastic collection of Roman altar stones, not to mention an enormous timeline, from which it was possible to learn very many dates, from Roman fort construction to the invention of mayonnaise.

The story of one commander, a friend of Hadrian himself, who followed his posting at Maryport with one at a garrison in Jerusalem felt particularly vivid as we climbed the reconstructed fort tower and gazed out over the blustery Solway Firth at the Scottish hills. The extremes of frontier life.