Once a month English Heritage Wrest Park run an Archaeology Club for kids. We have teamed up with them to offer conservation related events.

The first event ran in February, called Learning to be a Conservator, the aim was to help children understand the conservator’s role in documenting and understanding the past through the micro-excavation of soil blocks full of future/modern archaeological materials.

With a full classroom, we discussed the process of micro-excavation and documentation. We also looked at how we can use x-rays to discover what could be underneath the soil or the construction of a object.

Using toothpicks, water and cotton buds the group slowly (as slowly as possible anyway, it proved to be an exciting process!) revealed the objects from the soil.  Once all objects were excavated, the finds were documented, weighed and drawn.

The next event in March was more complicated, building on the skills learnt in February, in pairs the group micro-excavated a burial urn. The urns were filled with replica objects, each representing one time period or place: e.g. Bronze Age, China, Egypt, Iron Age, Late Medieval, Medieval, Roman, Neolithic, Saxon and Viking.

Without knowing which urn was which, they had to use their conservation and detective skills to determine the time period that the objects represented. 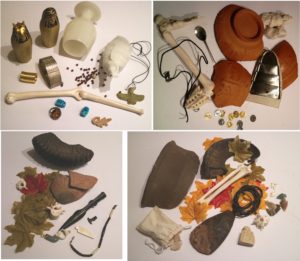 The event was a success, the group got to learn about the complexities of micro-excavation and how conservation and archaeology works together to learn more about archaeological objects.

This month we will be looking what happens to materials after burial by examining how people in the past celebrated and buried animals. Firstly we will look at the different ways animals were used over time, such as for spiritual protection or clothing, and we will also look at special animal burials and how we learn about the past through them.

They will get to make their own animal totem and think about how these materials will deteriorate over time. Updates from the day on a future blog.

If you are interested in hosting similar conservation events and would like some help, just let me know.